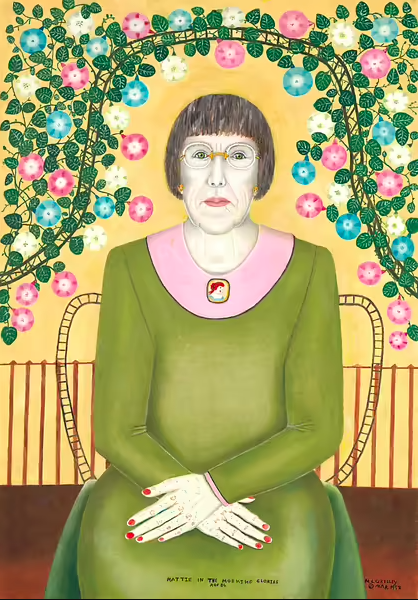 Like most female artists of the early 20th century, O’Kelley endured far greater hardships than her male counterparts, made double challenging by the economic hardships faced by the Appalachian community during this time. O’Kelley was born in 1908 on her family’s farm near Maysville, Georgia. The death of her younger brother in 1919 marked the end of her formal education as she was required to work the family’s farm. Her father’s death during the Great Depression brought an end to family stability and financial security. As the only unmarried child remaining near home, she was expected to care for her ailing mother. She worked as a cook, seamstress, and factory worker to provide financial support for her mother.

It was not until her late fifties that O’Kelley could retire to a humble shack where she would begin making art in earnest. She first began working in colored chalks on paper which she sold in flea markets, fairs and even the front steps of the High Museum, where her work would eventually catch the eye of then-director Gudmund Vigtel. He was so taken by a still life by O’Kelley that he acquired it on the spot for the museum, making it the first example of self-taught art to enter the High Museum’s permanent collection.

Her work also captured the attention of Robert Bishop, who would become founding director of the American Folk Art Museum, and collector and patron T. Marshall Hahn. Bishop was an integral force in O’Kelley’s early career, staging major exhibitions of her work in New York galleries. In the latter stages of O’Kelley’s career, Hahn established a strong bond with the artist and acquired scores of her work, which he later donated to the High Museum of Art and other American museums.

O’Kelley would go on to become a highly accomplished folk artist and enjoyed great financial freedom in the last years of her life. Since her death in 1997, her estate established long-term endowments to the High Museum to acquire art from self-taught artists.

This exhibition is organized in partnership with the High Museum and the American Folk Art Museum and honors the legacy of rural Appalachia, which O’Kelley so loved.