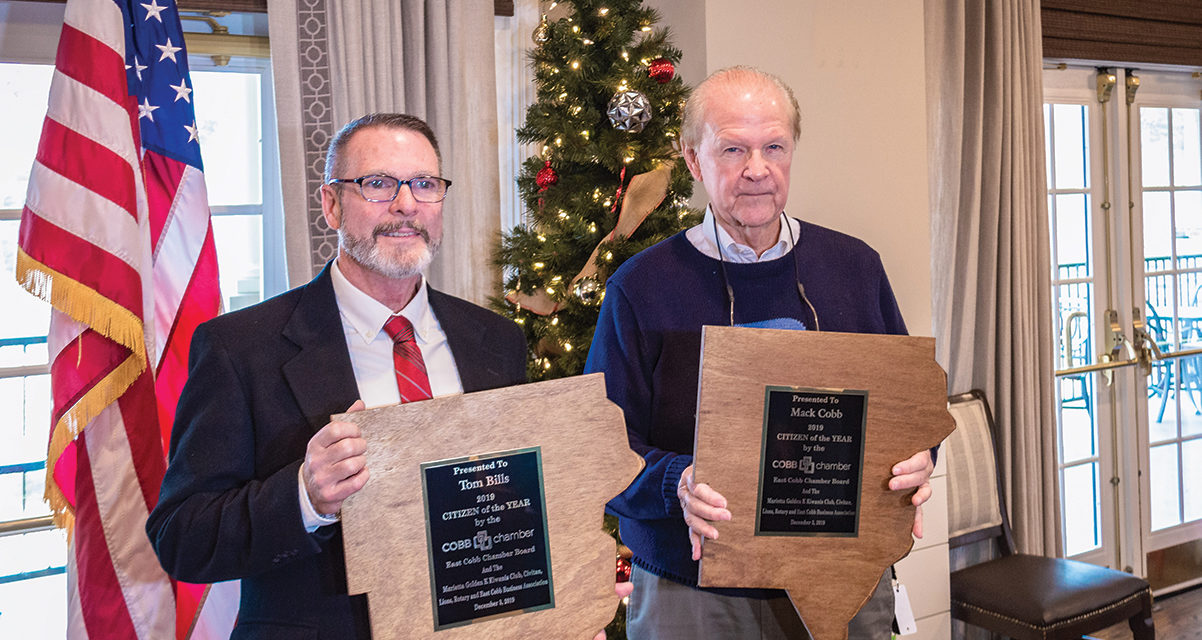 Tom Bills and Mack Cobb hold their plaques designating them as East Cobb’s Citizens of the Year.

The Cobb Chamber’s East Cobb Area Council selected two community members as its 2019 Citizens of the Year. Citizen of the Year Awards are given to honor an individual whose impact through the years will be recognized and regarded with pride as a role model throughout the area. This year’s outstanding citizens were chosen for their definable, exceptional deeds, with which they have made their community a better place to live. Awards were given based on local area nominations.

The two awards were presented to the following individuals at the East Cobb Area Council breakfast at Indian Hills Country Club last month:

Tom Bills, Senior Project Manager overseeing Construction, SPLOST and GIS for Cobb County Parks, was named a 2019 East Cobb Citizen of the Year for his tireless advocacy for the East Cobb Park and other volunteer efforts throughout Cobb County.

Tom’s volunteer and leadership activities range from being the original Treasurer and Past President (2003-2004) of Friends for the East Cobb Park to volunteering at Walton High School, Keep Cobb Beautiful, Cobb Veterans Foundation and many other worthy causes throughout Cobb County. Long before Tom joined Cobb County Parks as an employee- ee, he worked long hours alongside many other dedicated East Cobb volunteers to create East Cobb Park.

Mack Cobb, Pope High School Football Coach for the Middle School Feeder Program since 1987, was also named a 2019 East Cobb Citizen of the Year for his leadership at his school and in the community. Over the last 40 years, Coach Mack has coached more than 1,500 East Cobb students and has inspired many former players to continue their football careers after high school.

Mack has volunteered as a coach in East Cobb for over 40 years, focusing his attention on the feeder programs for students in 5th, 6th and 7th grades at the YMCA, Lassiter High School and Pope High School. Coach Mack always strived to teach much more than the game of football. He made sure all his players understood that family and schoolwork were more important than football and that believing in something bigger than yourself came first. His players quickly learned the rules and expectations, understanding that they were loved and supported by their coach. Coach Mack is known for the way he continues to follow the lives of his former players, and all know that Coach is still their biggest cheerleader.